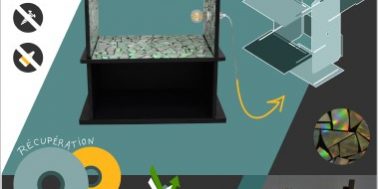 Disco Veilleuse Why did we choose the CD material ?

In 2018, we live in a world where information became more and more digitized. CDs and DVDs are less sold and often threw in the garbage. In a society where Netflix, Spotify and Deezer are kings, the CDs are just waste. In 2025, we think that this will be more a reality than never and the extinction of the use of CDs. Because of that and because of the plastic composition of CDs they will not be recycled well and often thrown in the garbage, as it is today. But to us, the CDs can be more. More useful, and poetic.

That’s why, with the support of wood, we chose to use CDs to embellish a night stand. Using the reflection of the light on the rainbow face of the CDs, we created a mosaic. This mosaic, when shined on by the light will reflect on the wall, creating a night light both beautiful and peaceful to sleep well. To be “not another night stand” we also chose to make our object without glue nor screw. Our object can be entirely assemble without any tools.

This website uses cookies to improve your experience while you navigate through the website. Out of these, the cookies that are categorized as necessary are stored on your browser as they are essential for the working of basic functionalities of the website. We also use third-party cookies that help us analyze and understand how you use this website. These cookies will be stored in your browser only with your consent. You also have the option to opt-out of these cookies. But opting out of some of these cookies may affect your browsing experience.
Necessary Always Enabled
Necessary cookies are absolutely essential for the website to function properly. This category only includes cookies that ensures basic functionalities and security features of the website. These cookies do not store any personal information.
Non-necessary
Any cookies that may not be particularly necessary for the website to function and is used specifically to collect user personal data via analytics, ads, other embedded contents are termed as non-necessary cookies. It is mandatory to procure user consent prior to running these cookies on your website.
SAVE & ACCEPT